11am – Doors open
Kerrang! Radio DJ in conversation with:
11.30 am –  Pete Turvey
http://www.rockinamoeba.co.uk/
Grew up in the mid/late seventies Birmingham metal scene. Lots of memories and memorabilia.

12.30 – Mike Clement
Mike Clement – “fell” into the rock and roll industry in the mid seventies whilst still at college in Manchester. Mike became a lighting designer working with a diverse range of artists in the late 70’s including Roy Harper, UK Subs, Wah Heat.
After a drunken encounter with an old friend, Ian Wilson from Sad Café, at local watering hole Mulberries, he was persuaded to take a new career direction looking after backline, taking up the challenge he spent the next 4 years working with Motorhead, looking after Lemmy and Wurzel for his sins! Early 1990 he got a call to be guitar tech for Sabbath and has been there ever since…”

1.00pm Chris Phipps – Music Archivist
Chris Phipps is a Birmingham born documentary maker, archivist and music historian. His credits include  ‘Motor City Music Years’, profiling the rock history of the West Midlands, the definitive ‘Bob Marley – Time Will Tell’ biopic, an award winning history of North England rock ‘North Stars’ and countless Top 100 TV formats.  As journalist, radio and TV producer he has tracked the evolution of blues-rock, metal and the NWOBHM for over 3 decades.

As an archivist he has worked closely with director Dick Carruthers on ‘Metal–Louder Than Life’ DVD and sell out  ‘Zeppelin at 40’ shows all over the UK.
He was also the assistant producer of Channel 4’s controversial music show The Tube. Enabling TV debuts to bands ranging from Fine Young Cannibals to Twisted Sister. 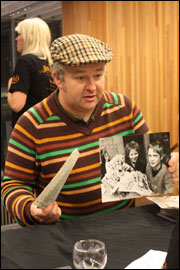