Capsule is a cultural alchemist: an innovative curator initiating, producing multi disciplinary work, this encompasses festivals, cultural events, and artist development through partnerships with a range of organisations. Capsule crafts extraordinary cultural projects for curious audiences; we seek to reveal the otherwise indescribable connections between art forms. Our aims are to introduce new audiences to our programme of activity, provide a platform for new work sonic/visual practice, expand the opportunities available for artists to develop and champion the unclassifiable. We have a unique ability to present the highest quality experimental work in a playful and imaginative way in different contexts, allowing us to reach out to diverse audiences. We create a context and critical mass for new work.

From hand crafted wooden structures designed by the award winning Studio Myerscough which acted as a billboard for the opening of the largest library in Europe to an immersive installation with remote control cars with styli attached, which raced across a track constructed from 1000’s of disused vinyl records nestled under a giant viaduct, to a stupendous procession of unexplored rhythms, unsung songs, unexplainable creatures and un-mythical beings set on a village green in Stoke on Trent.

“UK’s best small festival – By embracing the heaviness in Birmingham’s heritage, and adding a strong dose of eccentricity, Supersonic is world-class.” The Guardian

Nowhere else will you find a festival experience quite like Supersonic’s – since 2003, we have been hosting superior weekends for the adventurous audience, taking care to present only the most artistically relevant and irreverent acts from the UK and across the globe, while simultaneously making sure to fill every moment with the opportunities to let loose and party, or sit down at engaging talks, discussions and workshops, or take in exclusive screenings and exhibitions.

“Home of Metal turns the Midlands up to eleven. Heavy Metal was born in the Black Country when its furnaces still blazed. Now the area is celebrating its heritage”
Stuart Jefferies, The Guardian

Home of Metal’s exhibitions and events join the dots between music, social history, visual art and fan cultures to produce a new perspective on Heavy Metal. One that is celebratory, eschews notions of high/low art and joins audiences and performers together. Home of Metal is devoted to the music that was born in and around Birmingham. Music that turned up the volume, down-tuned guitars, and introduced a whole new meaning to the word ‘heavy’.

‘connects, challenges and inspires’ The Skinny

‘Contrast, without which we cannot perceive the world, is a phenomenon that defies homogenisation, where pleasure is relief from pain, and pain can be a prime for pleasure; where art is opposed to commerce, and the mundane is pushed back, often all too temporarily, by creativity. Capsule, the curators of the annual Supersonic Festival clearly understand this: from the coarse granularity of its urban, industrial environment so strongly set apart from the fallow fields of most other  festivals, to the finer details of its handpicked programme of new music, installations, workshops, walks and talks, all deftly juxtaposed across a long weekend, the festival never fails to nurture new connections and rupture old ones.’
Musique Machine on Supersonic Festival

‘Its squalid bogs and towers inspired the landscape of Tolkien’s Middle Earth and, during the seventies, it became the concreted ‘Detroit of England’ which galvanised Justin Broadrick to pioneer industrial metal. There was also that sentient, superhero-car called Brum. But let’s not focus on the far-away or recent past – alongside these aforementioned institutions another name should be added to Birmingham’s ‘Star Walk’ that genuinely lines its crippled pavements. And that name is Capsule.’ The Quietus

‘The work with Capsule has been incredibly rewarding. Home of Metal has been the most successful festival in the Black Country in recent history. Bringing some of the highest visitor numbers to the region for an event of this kind, attracted more press, media and braodcast coverage than any other event or festival and created more political and local authority director interest than any other events programme – all due to Capsule’s diligent and hard efforts. I would recommend Capsule to others as an organisation that do go that one step further and really make a difference’
Max Bailey, Black Country Arts Partnership

‘The personal approach as real enthusiastic members of the fanbase of the music they are curating, as well as being the curators themselves, provides a level of respect and integration which has continued to be a pleasure to encounter’
Stephen O’Malley, artist and musician

‘I’ve performed at Capsule organised events / Supersonic a number of times and every time has been an invaluable experience.  I’ve also been invited to take part in large scale participatory projects with internationally renowned artists which have been some of the most inspiring and rewarding musical experiences I’ve had.’  Katharine Eira Brown, artist and musician

‘Capsule are responsible for initiating an array of consistently diverse and engaging projects, including projects in which I have played a role. Each occasion has been facilitated by an openness to communication which has assisted in the development of the project and has been marked by their wanton enthusiasm and determined professionalism which create an ideal environment for collaboration.’
Nicholas Bullen, artist and founding member of Napalm Death

‘I like to think of Capsule as the peristaltic pump of the independent music scene , a reliable heart pumping blood to the tips  and branches of good music wherever that might be.’
Geoff Dolman, Static Caravan

‘a highly visual festival experience with some of the most eclectic, deconstructed musical minds on the planet.’
Clash Music on Supersonic Festival

‘the most consistently brilliant and forward-looking festival in the UK, if not the world’
Vice on Supersonic Festival

‘memorable to me and I’m sure to each and every attendee, was the richness of the events. The visual art was extraordinary, the Birmingham Museum show alone was something that a few of us thought of hiding out at for a few weeks, the movies, the MUSIC!!’
Professor Deena Weinstein on Home of Metal 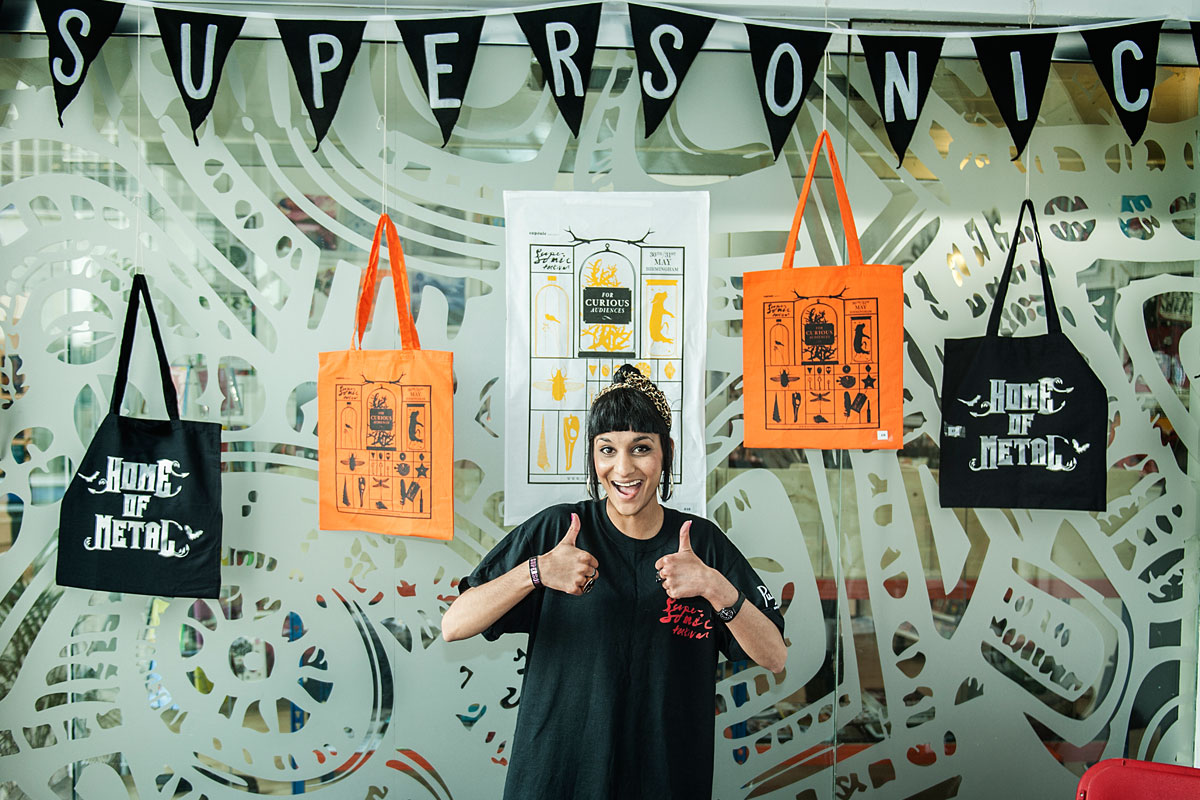 Volunteers
There are plenty of opportunities to be a volunteer at Capsule and join our team, you are able to gain an overview of how our projects work, and to contribute real input and value to what we do. In addition we have a number of intern opportunities during the lead up of Supersonic Festival. Get in contact via  volunteer[at]capsule.org.uk 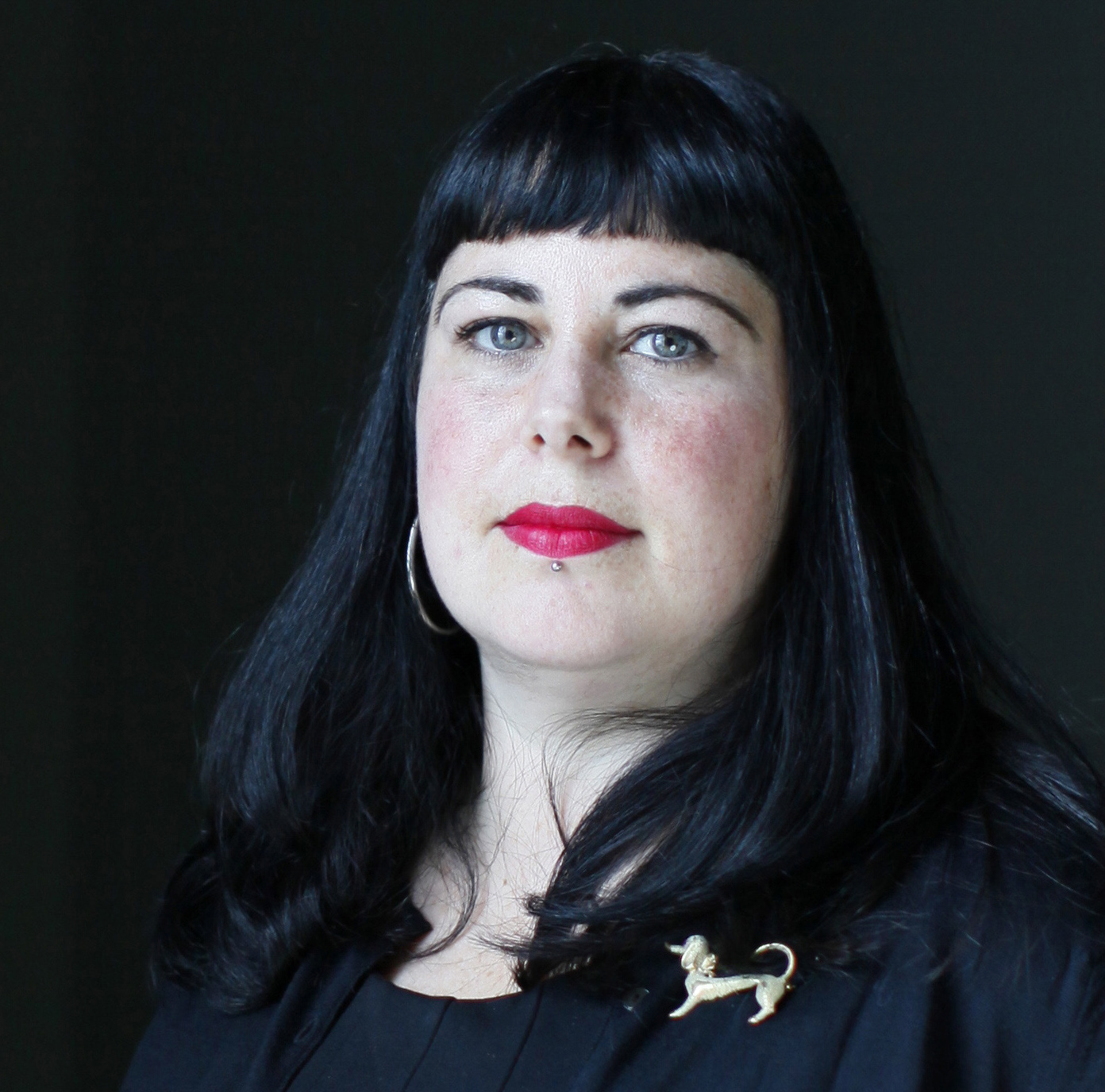 Identifying a gap, Jenny Moore and Lisa Meyer formed Capsule in 1999 to produce live events and exhibitions for adventurous audiences in Birmingham, showcasing both international touring artists and homegrown talent.

Since meeting through mutual friends and attending numerous gigs together, the pair resolved to start putting gigs on themselves, starting with an event at the Custard Factory’s Medicine Bar in 1999. “We used to travel to other shows around the country, so we’d go to Nottingham quite regularly, as well as London and Leeds,” explains Lisa.

“We were influenced by the DIY scene at the time and we felt that none of the bands or artists that we were interested in, were coming to Birmingham. People tended to moan about the fact that stuff wasn’t happening, rather than do that we were proactive and just took a risk.

At the time, Jen was working at the Medicine Bar and we talked to Simon, the guy that owned it, and he gave us a bit of money to put on our first exhibition there. So we did that in 1999 and we also put on some bands as part of that event, because the whole idea for us was that we wanted to mix up the two things; we didn’t want it just to be music or just art, but try to bring the two things together.”

This idea of creating and sustaining creative communities is central to Capsule’s ethos, and the pair – who cited Fugazi’s Dischord Records as one of their major influences.

“The key thing is that we both have very eclectic tastes. We haven’t got stuck with one type of genre, we stay curious, searching out the most exciting artists, so I think that’s kept people interested.” 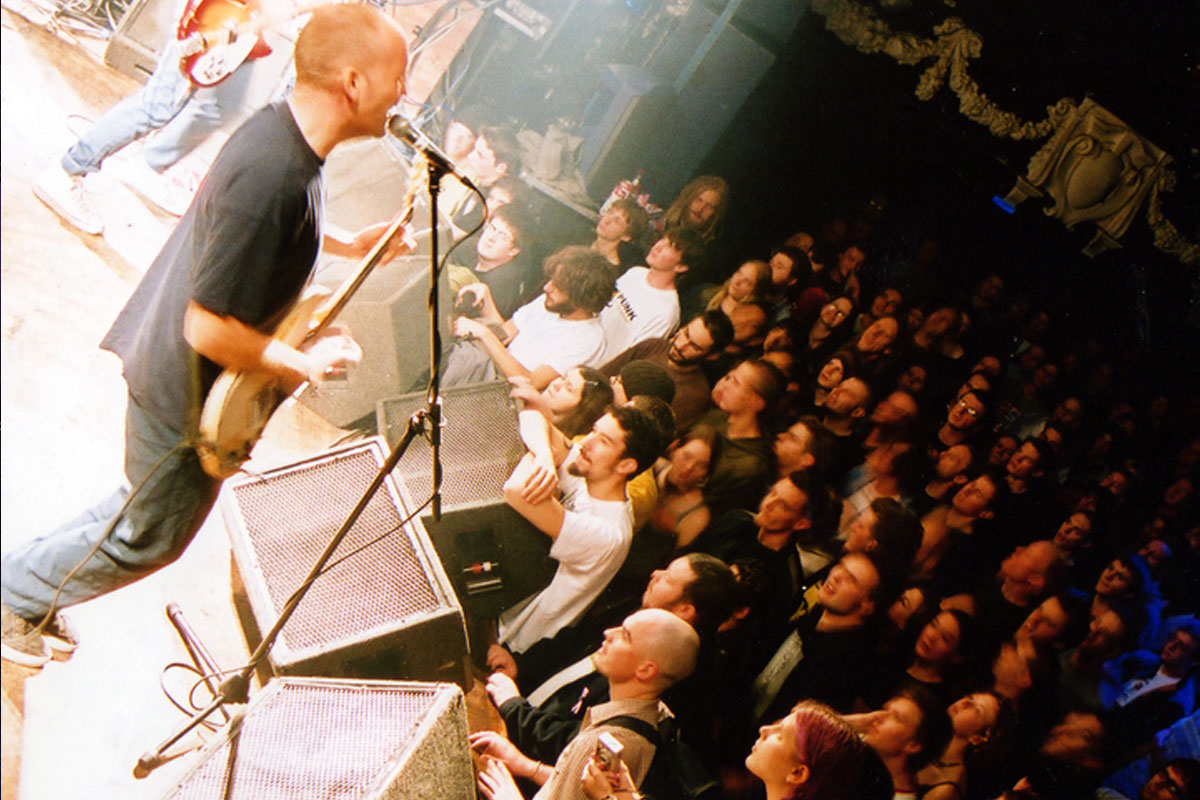 The duo began with a DIY ethos which they maintain to this day, and from small beginnings they have worked with major artists like Kim Gordon, Godspeed You Black Emperor, Fugazi, Morag Myerscough and Tony Iommi, whilst also supporting 100’s of emergent artists.

Jenny Moore stepped down as director in 2013 and now runs an amazing travelling children’s bookshop How Brave is The Wren. Lisa Meyer is now both the Artistic Director and CEO of Capsule, supported by a core team.

There are currently no vacancies – join our mailing list for up to date opportunities when they are announced.

Anna Russell
General Manager for the Bristol portfolio of properties for National Trust and part of the strategic lead team for development of National Trust in cities. Anna is currently leader of a team of 60 people across three main sites. “Home of Metal is absolutely the sort of project that the National Trust should be championing in the future. Coming to Supersonic and Capsule gigs since the beginning of time … and have loved every minute of it.”

Gina Crane
Gina has worked in the grant-making sector for nine years, and is currently Communications and Learning Manager at Esmée Fairbairn Foundation, one of the largest independent grant-makers in the UK. Gina works with grant-holders as well as the Foundation itself to help them understand, talk about, and increase the impact they have on those they work with, on their sectors and on decision-makers. Before joining the Foundation in 2007 Gina worked at the Courtauld Institute of Art, literary and talent agents PFD, and as a fundraiser and Alumni Officer at Trinity Hall, Cambridge. Gina is also a marathon runner and the Melvins’ biggest fan.

Laura McDermott
Laura McDermott is Creative Director of Attenborough Centre for the Creative Arts.  The space (formerly Gardner Arts Centre) is an interdisciplinary arts hub connecting University of Sussex to Brighton & Hove and the wider national and international arts and research community.

Previously (2009 – 2015) Laura was Joint Artistic Director (with Harun Morrison) of Fierce Festival – an international festival of live art, queer politics and activism in Birmingham.  In 2012-13 Laura was awarded a CLORE Fellowship in Arts Participation and Engagement, supported by the Paul Hamlyn Foundation. Laura was a creative producer at BAC (Battersea Arts Centre) in London, from 2005 – 2009, where she programmed seasons, festivals and was lead producer for the Punchdrunk and BAC co-production The Masque of the Red Death.

Stuart Rogers (Chair)Stuart Rogers was born and educated in Birmingham and has worked in theatre management/production since 1973 when he became Theatre Programmer for the Birmingham Arts Lab. He then moved on to manage the Gulbenkian Studio Theatre and Newcastle Playhouse in Newcastle upon Tyne, followed by periods as Executive Director for Chester Gateway Theatre and Nottingham Playhouse. Following a couple of years in the southern Italian city of Bari working with the international touring theatre company Teatro Kismet, Stuart returned to Birmingham in 2002 to take up the post of Executive Director at Birmingham Repertory Theatre. He left that position in 2019 to concentrate on freelance producing.

Please note, we welcome new artists to send samples of their work for future consideration however Capsule receive a lot of emails and letters from artists and whilst we endeavour to look into everything that’s sent our way, we cannot guarantee a personal response.

Capsule is committed to ensuring digital accessibility. We are continually improving the user experience for everyone applying relevant accessibility standards. For more detailed information download our policy which we will review periodically.