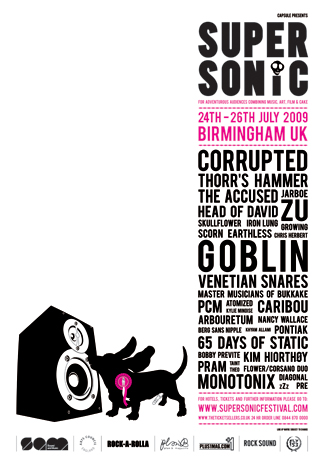 SUPERSONIC have confirmed very exciting news  that Italian legends, GOBLIN will be part of this year’s line-up, their first show in the UK in 20 years they join the likes of Corrupted, Head Of David, Thorr’s Hammer…

Throughout their career which spans from the early ‘70’s, Goblin have soundtracked around 20 films, with ‘Profondo Rosso’, ‘Suspiria’ (a film that became the benchmark in 70’s gore flicks) and ‘Dawn Of The Dead’ that really form the basis of their legendary reputation as they perfectly showcased their vast stylistic repertoire from the prog-flavoured rock they’re best known for, through tribal rhythms, electronics, orchestration which seamlessly fitted and added to the impact of the on-screen action.

Recent years have seen a huge resurgence of interest in the band’s work, particularly  amongst the alternative rock, goth and horror film communities, with very well received reissues of their classic soundtracks and DVDs of the films they worked on, plus the compilation cd ‘The Fantastic Voyage Of Goblin – The Sweet Sound Of Hell’. 2005 also saw the publication of the book “Goblin – La musica la paura il fenomeno”, written by Giovanni Aloisio, and there is even a band in the US made up of Goblin fanatics and calling themselves Zombi.

“The legacy of Goblin is vast and full of surprises, and they’ve had a great influence on how rock music can be used in film scores. And, as such, Goblin can claim to be not only one of the most important of Italian rock bands, but also creators of some of the finest Italian film soundtracks alongside the redoubtable Ennio Morricone!” Alan Freeman