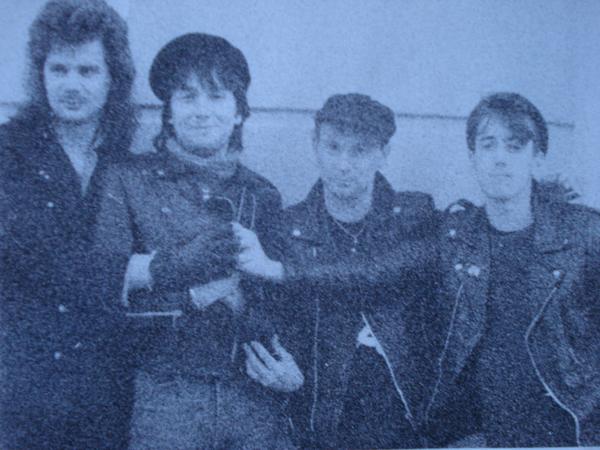 Interview with Head Of David
by Rock A Rolla Magazine – Issue :May/June 2009

In a year that’s already seen the unlikely return of Faith No More, The Jesus Lizard, Thorr’s Hammer and Goblin, the most surprising reunion is of industrial metal legends Head of David. Back in late 80s/early 90s, the West Midlands outfit ruled the roost, their pummelling Throbbing Gristle meets Suicide meets Sabbath combination setting the blueprint for bands like Godflesh, Fear Factory, Pitchshifter and numerous others. Frontman Stephen R Burroughs, once staunchly opposed to anything in the way of a reunion, finally succumbed, an offer from the folks behind Supersonic Festival too good to pass up and his long-term steadfast refusal eventually transforming into genuine enthusiasm.

“It’s something I swore, personally, that I’d never do” Stephen tells us of the reunion. “I swore I’d never play in this band again, however we got the offer from Supersonic – it was a good offer and it’s been 23 years since the original line up has played together, and we thought that was quite fitting so we decided to do it. Simple as that.”

So was there any particular reason he swore he would ‘never’ do it again after they split in 1991?

“No particular reason, I just went off and did other things. Dave (Cochrane, bass) and Sharp (Paul, drums) continued to play, Eric (Jurenovski, guitars) hasn’t played live – his last gig was with me in America, that was in Houston. I just didn’t wanna do it – I think bands getting back together is highly tasteless to be honest, but I’m joining the ranks of the tasteless (laughter).”

Since the band’s dissolution, the band members have variously gone on to do other things, musical and otherwise, the most high profile of course being Justin Broadrick’s Godflesh, Jesu and numerous other ventures. Dave Cochrane worked with Broadrick on a number of projects including Jesu, God, Ice and the upcoming Grey Machine, as well as The Courtesy Group and Transitional, while Eric, Sharp and Stephen all but retired from music. “I continued to write” Stephen says. “I’ve done a lot of things you see, but nothing that’s surfaced. The last time I recorded was actually last summer for the Alan Vega tribute, the 10” singles on Black First – that’s the first time I’ve been in the studio for years”.

One of the original outfits on the industrial metal scene, the Black Country foursome were operational between 1986 and 1991 with a varying line-up, producing three albums and a handful of EPs on Mute’s Blast First label before calling it quits. Appearing at this year’s Supersonic Festival, which is fast shaping up to be a sort of Dream Comeback Festival this year (see also Thorr’s Hammer and Goblin), 2009 marks the end of an almost two decade hiatus, with the bad appearing in their original 1986 guise.

“That’s the original Head of David” Stephen confirms. “Me on vocals, Eric Jurenovski on guitar, Dave Cochrane on bass and Sharp on drums, and that’s the band that recorded (the band’s 1986 debut EP) Dogbreath.”

And what about Justin Broadrick? Was he considered for the reunion?

“Justin, he’s locked away in his studio in Wales somewhere. We did suggest that he might like to do something with us for this, but he’s a busy man and simply couldn’t come along to rehearse – he’s doing too much studio work so sadly he won’t be involved. The initial idea was to get him involved and I think he was quite keen to do it as well. He played drums when Sharp sadly had to leave – Justin took over and he played on Dustbowl, the second album.”

So how was it playing these songs for the first time in twenty years?

“It was surprisingly good fun actually. It feels very different. The good thing about it is it doesn’t feel like it’s some ‘friends reunited, let’s all be self indulgent and try and live out our past’ kind of thing. It does feel quite relevant because I think with maturity over time, in ourselves, we’ve approached it all differently and it does feel quite fresh and it’s sounding very good. I said initially: let’s rehearse, if it sounds good, if we’ve still got the same sound, we’ll do it. And we plugged in and away we went and it was really quite easy. As I say, it does sound good.” Presumably, though, energy levels aren’t quite the same as when they were all younger? “(laughter)  You’re joking! No…that’s a categorical NO, and I certainly don’t shout with the same nervous energy that I used to”.

Like so many bands that would eventually prove to be influential, during their active phase Head of David were largely acknowledged only by those in the know, remaining underground while bands like Godflesh, and later on Fear Factory (who covered ‘Dog Day Sunrise’ on 1995’s Demanufacture), took this sound to a wider audience. Stephen, for one, is unperturbed by their lack of tangible popularity the first time round, nor was it ever part of the plan.

“It was never a consideration at all, and it’s something I never expected, that we’d be a big band. I do think that we were overlooked but I said at the time, back in 1986, that we’ll be more popular in 30 years time than we’ll be in a year’s time. That happens with a lot of bands, when people re-discover a band. I wasn’t expecting any fame then at all, I didn’t particularly want it either. But yeah, I think with any band it’s recognition they want more than anything, and I think that recognition started to seep through various channels, the ones you just mentioned, the rise of that genre of music, when Ministry mention us in dispatches, and lots of other bands have. So I think that’s brought our name to a few people.”

“But to be honest” he continues, “all we did at the time was we just played what we listened to and liked, we didn’t really think ‘oh, this is industrial metal’. We were certainly conscious, coming from the Black Country, the Midlands, of our heavy metal roots, with Sabbath and Led Zeppelin. But at the same time we didn’t want to be a heavy metal band – we wanted the overwhelming sound of a heavy metal band but at the same time we were listening to Throbbing Gristle, Boyd Rice and all the early industrial stuff, so it’s just a natural seepage of all those influences and that’s where the sound came from. It wasn’t necessarily concocted, it was purely instinctive.”

So with the band revving up for their performance at the upcoming Supersonic Festival in their natural surroundings of Birmingham, UK, the reunited combo are about to make their full comeback, with a swiftly widening plan to resurrect their name for a new (and for that matter old) audience.

“The back catalogue should be reissued later this year, hopefully in time for Supersonic, but I’m not sure when that’s gonna happen. As for recording new stuff, it’s now become apparent that we would like to record something – more of a continuation of what we were doing back then and put-the-record-straight kind of record. That’s what we’d like to do. Something with a bit of feeling. So hopefully we will record, but we’ve got Supersonic in mind, and that’s it at the moment. There have been a few offers already to do other things, and there’s a good chance that we’ll do other things. I can only be as vague as that at that moment”.

To listen to tracks by Head Of David check:
http://www.myspace.com/headofdavidofficial