Wouldn’t it be lovely if we all just talked a bit more? I feel so distant from you. What the devil are you up to? If you’re doing something super awesome, got some plans under your creative sleeves, putting on interesting gigs, exhibitions and the like then tell people about it at this little talky talky chit chat in association with Created In Birmingham. 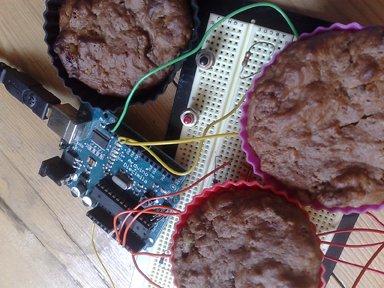 In the interval, pindec will be playing her Cake Orchestra: a cake-music interface for people without much musical ability but with an interest in cakes (i.e. pindec). The Cake Orchestra is composed of several sets of cakes, each with an instrument noise pre-assigned. Moving the cakes around on the playing surface triggers the instruments. Guaranteed to be more edible than a real orchestra.
This is a FREE EVENT
6.30 – 9.00pm at VIVID, Heath Mill Lane, Digbeth
There are still a few places left you must RSVP admin[at]capsule.org.uk with KMKY in the subject