Tony Dudley Evans of Birmingham Jazz wrote this great piece on contemporary free jazz and the genre’s links with rock and punk music.

The Variety of Free Jazz and Improvised Music Today

I spent a lot of the Christmas period listening to Keith Jarrett, the solo albums, the trio especially the Inside Out album recorded live in London and Jarrett’s American Quartet with Dewey Redman, Charlie Haden and Paul Motian Listening to these various recordings made me realise what a range of music now contains free improvisation and what a broad term ‘free jazz’ now is. Jarrett says on the album sleeve, free playing is ‘an amazingly important part of true jazz history’. He goes on to say:

We need to be even more in tune with each other to play this way, without material; and even more attentive. Every possibility is available if you take away the tunes, but only some are valid under the circumstances. It is only our sensitivity to the flux that determines whether the music succeeds or fails.
(Inside Out Album Sleeve ECM Records).

The term free jazz began to be used in relation to Ornette Coleman’s groups of the late 1950s, and the totally improvised album called Free Jazz for two pianoless quartets may well have established this term.
It is in Europe that the free jazz has developed its greatest freedom and improvisers such as Evan Parker, Peter Brotzmann, Alex Schlippenbach, Albert Mangelsdorff and many others have established playing styles that have moved away totally from the conventions of American jazz. It was instructive to listen to two albums (also over the Christmas period!) produced as a result of Birmingham Jazz initiatives. Opus de Life with the Profound Sound Trio (Paul Dunmall, Henry Grimes and Andrew Cyrille) strikes me as free jazz that comes naturally from the jazz tradition. There are no tunes and everything is totally improvised, but the styles of playing of all three players seem to me to derive from a jazz approach. 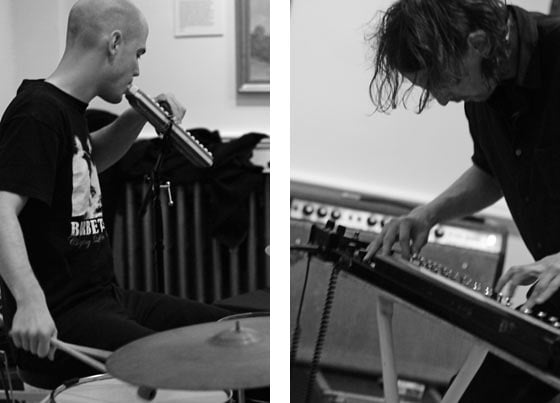 Of course free jazz is not always energy music and both CDs referred to above contain passages of great gentleness and beauty and this is a constant feature of the best of free jazz. But this energy of free jazz does have an affinity with certain kinds of rock music. In recent years there have been a lot of collaborations between free jazz players and less mainstream rock or punk artists. Evan Parker has, for example, played with Jah Wobble and a number of ‘noise’ players; Paul Dunmall has played with Chris Corsano, Bjork’s drummer who also played a totally improvised duo set with Mick Flower on keys at The Supersonic Festival in 2009 and members of The Guillemots run their own free jazz group The Gannets. One of my favourite albums of 2009 was Sunn O>>>’s Dimensions and Extensions which put together Sunn O>>>’s drone metal guitar work with jazzers Julian Priester and Cuong Vu. Then a number of jazz groups such as The Thing, Peter Wareham’s Acoustic Ladyland and, even more, Pete’s The Final Terror and Led Bib are deliberately incorporating a strong rock and ‘in-your-face’ punk element into their approach.

It’s all a sign of how interesting the alternative music scene is at the moment and how barriers and boundaries are being broken down. One very interesting concrete piece of evidence of all this is the fact that a group called brass unbound is touring in late January and early February with the punk band The Ex and it seems that they will be playing together. Brass unbound consists of Mats Gustafsson of The Thing, Ken Vandermark, both on saxophones , Roy Paci on trumpet and Dutch trombonist Wolter Wierbos.

For full article go to http://www.birminghamjazz.co.uk