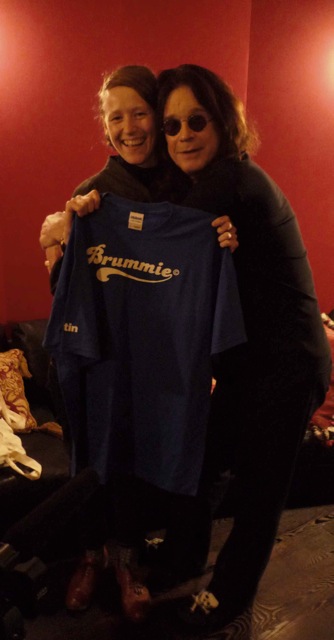 Come on who wouldn’t fly out to LA at the drop of a hat to meet Ozzy Osbourne? well maybe not everyone but Capsule couldn’t miss out on the opportunity so thats exactly what i’ve been up to this past weekend and i can assure you its been possibly one of the most surreal experience’s of my life this far.

Home of Metal have been exchanging emails and phone conversations with a very lovely lady called Lynn at Sharon Osbournes Management for a little while, we finally settled on a date for 8th March .

Not being able to afford to fly our very dedicated film crew (sorry Matt, Ella & Martin – we would’ve if we could!!) we had to rope in some willing volunteers to do the filming and interview and managed to find two lovely chaps Ewan Bowman (filming) and Ally Christie (interviewing) that live in LA. After some slight deliberation we decided it was too good a chance to get to meet the man himself and tell him about the project in person, so we made the decision that one of us should go, i was more than happy to take one for the team, booked the flights on Thursday and flew out on Saturday.

Arriving late Saturday night there wasn’t much chance for exploring so that was left to Sunday when I took the opportunity to indulge in some record shopping at the amazing Amoeba Records (the photos say it all) spending most of the day there I eventually tore myself away to go and meet up with Ewan for some food to figure out our game plan for the following day.

Had a lovely evening and all was going to plan, early to bed to get some much needed rest in preparation for the next day only to be awoken in the middle of the night with terrible stomach ache and shivers, spent the next 4 hours being sick at regular intervals, obviously my lovely dinner wasn’t that lovely after all.

Now we can look at this one of two ways, either it was very unfortunate that i was feeling extremely sick and therefor didn’t get any sleep and couldn’t focus on the following day, or – that the fact that I felt so ill stopped me from feeling nervous and therefor meant that I was able to function and get through the interview, i’m going with the second one.

So a half a litre of some disgusting tasting cherry rehydration liquid, lots of water and a couple of bananas and I was ready for action (well as good as i was going to get anyway)

We had a bit of a drive out to meet Ozzy so we arranged to meet early as we were all anxious to get there on time and not get stuck in traffic, this meant that we got there at about 11.20 (little too early as we weren’t due till 1pm) so we spent some time in a near by mall drinking coffee and swapping stories.

At 12pm we decided to bite the bullet and head back over, we found our way easily up to the house. We rang the door bell and Tony (Ozzy’s PA) answered he came to the door to meet us and we were greeted by a small selection of dogs (one had left a little present in the hall way so we felt very at home straight away). We were led down to Ozzy’s home recording studio in the basement via walls lined with gold discs and awards, the studio has deep red walls, dark wood flooring with gold crosses on the door handles. Ally was most impressed that there was a urinal in the bathroom (we all have own personal goals in life) i was impressed by the fridge full of Fiji water bottles and commented on how much they sell them for at Selfridges back home.

After a short while setting up cameras and a bit of time to explain the project in detail to Tony, we were ready for the interview. Ozzy walked in we all shook hands and introduced ourselves.. the strange thing was that it didn’t feel strange at all, i think it has a lot to do with the fact that we were made to feel very welcome by Tony and all of the conversations i’d had with Lynn leading up to it were great too – so thank you very much to both of them for getting us there!!. anyway Ozzy’s first question to me was where was i from – i told him Hall Green – “oh i know it yeah I know it”

So we explained the project and he just started reeling off stories even before we got to the questions! The interview went amazingly from finish to end, although i’m sure we’ve got a lot to learn with not trying to make background noise (sorry Matt) but its difficult not to laugh when Ozzy’s telling you how “a sign of success in Birmingham was being able to drink mid week” or something along those lines!

Prior to me leaving Lisa had been and brought a Brummie t-shirt from the CIB shop to give to Ozzy as a gift so i presented him with this and asked for a photo with me and him, at which point he gave me a  big hug, Ewan taking the photo declared “ah thats beautiful, look at that Brummy love!” the boys had their photies taken too …

and we all got signed photos – so that we have something to add to the archive!!
Interview over, we packed up said our good byes and made our way out, i nearly fainted leaving the house and had to make a sharp exit, think the adrenaline that had kept me going had finally subsided…

shot off to get something to eat, Ewan dropped me at the airport got on the flight at 8.30pm Monday night arrived in London Tuesday 3pm and back in Birmingham in time for tea (well a piece of dry toast for me please) and now.. here we are in Texas about to interview Lemmy, its a hard life but someones got to do it…