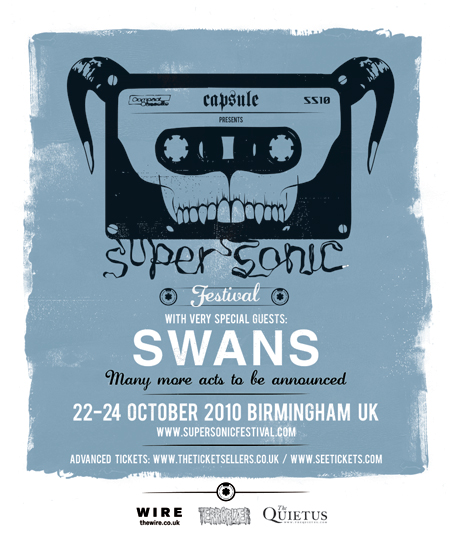 To launch the 2010 edition of Birmingham’s acclaimed annual Supersonic Festival,  Capsule are over the moon to announce that Michael Gira’s massively influential NYC band SWANS will headline this year’s festival, which takes place from 22 – 24 October 2010. Tickets are now on sale! Their appearance at Supersonic Festival 2010 will be their first British show since they disbanded in 1997.

This rare and exceptional performance by SWANS mark the start of a series of line up announcements for Supersonic 2010, with many more exciting acts and artists to be revealed in the coming weeks and months.

Moving from its previous July weekend date to October from 2010 onwards, Supersonic will once again take place in and around the Custard Factory in the heart of Eastside of Birmingham, utilising converted factory warehouses and art galleries and offering up-close, intimate settings to showcase some of the most exciting music out there. Capsule’s passion for genre bending sound and performances is at the heart of all their events – there are not many places where you can listen to funeral doom, prog, folk, avant jazz and grindcore in one weekend.

This is what Supersonic 09 was all about – we’re pretty sure you’ll enjoy 2010 even more.