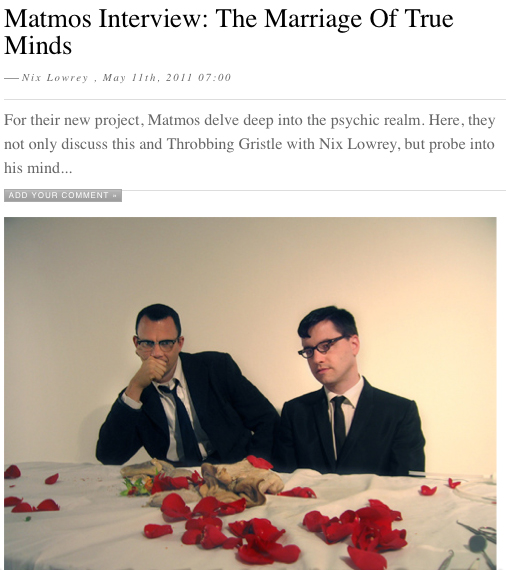 Matmos – the electronic duo comprised of Drew Daniel and Martin Schmidt – have been creating, constructing and collaging sonic ephemera since the mid 90s. With each album they release, Daniel and Schmidt seem to have thrown each other a gauntlet, between them creating compositions based around the collection and processing of particularly unorthodox sounds. Sometimes compared to artists like Steve Reich, and certainly to Pierre Henry (the ‘father’ of Musique Concrete), Matmos have created albums entirely from the sounds of surgery (A Chance To Cut Is A Chance To Cure), used the sound of a bovine uterus (on their venerative album The Rose Has Teeth In The Mouth Of A Beast which pays tribute to notable queers), and on their first self-titled effort sampled the nerve signals of a crayfish.

Read the full interview by Nix Lowrey HERE
Matmos perform with J Lesser at the mac in Birmingham this Sunday tickets are available HERE
We’re intrigued and so should you be – see you there.