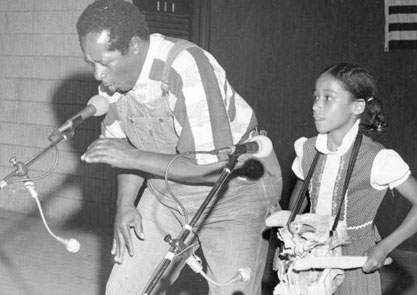 We’re thrilled to announce a wonderful event in partnership with Vivid Projects. A presentation of amazing footage from the Alan Lomax archive and Mississippi Records, featuring rarely seen film shot during Alan Lomax’s North American travels between 1978 to 1985 and Mississippi Record’s own enormous library of folk blues, gospel, esoteric, international and punk music. I DON’T FEEL AT HOME IN THIS WORLD ANYMORE takes place on Wednesday 26th June.

Eric Isaacson of Mississippi Records will be present and will screen a film of musicians associated with the Mississippi Records label such as one man band Abner Jay, angel channeling Bishop Perry Tillis, Rev. Louis Overstreet and his four sons, legendary folk singer Michael Hurley and many more. Each film segment will be introduced with brief stories about the musicians. There will also be a short slide show that tells the story of the underground music industry and Mississippi Records.

“Alan Lomax (January 31, 1915 – July 19, 2002) was one of the great American field collectors of folk music of the 20th century. He was also a folklorist, ethnomusicologist, archivist, writer, scholar, political activist, oral historian, and film-maker. Lomax also produced recordings, concerts, and radio shows in the U.S and in England, which played an important role in both the American and British folk revivals of the 1940s, ’50s and early ’60s. During the New Deal, with his father, famed folklorist and collector John A. Lomax and later alone and with others, Lomax recorded thousands of songs and interviews for the Archive of American Folk Song at the Library of Congress on aluminum and acetate discs.”

This event takes place on Wednesday 26th June at Vivid Projects. Tickets are £5 and available via theticketsellers.co.uk