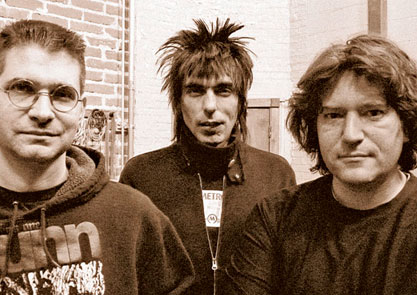 Wow! A firm favourite of Capsule, the mighty SHELLAC will play Birmingham on Monday 25th November. They’ve not been in town since the Release the Bats show (with Lightning Bolt, OM) back in 2008 so please do give them a firm welcome back!Tickets are £15 from www.theticketsellers.co.uk

“Shellac played its first shows in Chicago in 1993 and has done a lot of stuff since then, including playing on a party boat in Serbia and a record 74 times at various ATP events. Bob has one wife, a yellow bike and is acquiring more cats; Todd has one dog, no wife, a silver Telecaster and two blouses; Steve has three cats, a fiancee and a PT Cruiser, which is quite roomy and not dorky or a mom car fuck you guys.  The band members all work for a living, and playing in the band is their pastime. Because of this, they don’t tour often or for very long. Todd, Steve and Bob love playing music together. We assume that the band will continue to release albums and play live at the same sporadic pace indefinitely. You should be so lucky.”

Support will be from cellist Helen Money, a Los Angeles based cellist who has become known for her unique sound, bold compositions and compelling stage performance.

and it’ll be a great few days as Sunday 24th November the Adrian Utley guitar orchestra will perform at the library, and Tuesday 26th November, OM + ORE play the Rainbow.