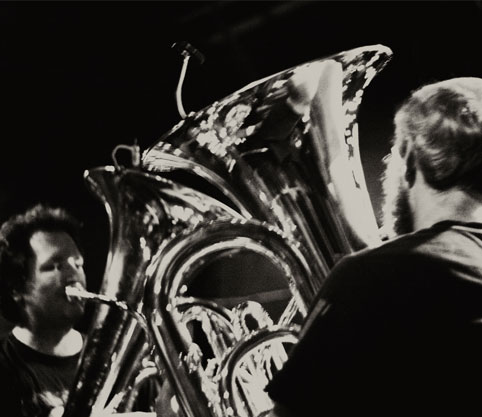 We’ve got a score of great gigs coming up, including Adrian Utley on 26th Nov at Library of Birmingham, performing Terry Riley’s ‘In C’ and Shellac + Helen Money on Monday 25th November at Rainbow Warehouse. Rounding up this trio of excellent shows is OM, always a fantastic live band, they’re joined by Lichens. Support comes from doom tuba group ORE, who will be playing as a trio.

“Just three years into their dual-tuba project, Birmingham’s ORE continue to evolve rapidly. From early drone/doom beginnings their music has lately drawn inspiration from Indian classical music and other improvisational influences to become something much more difficult to define.

Autumn 2013 sees them celebrating the release of their new double A side 7″ in collaboration with Japanese noise master KK Null on Endtyme Records, and for this performance they will be joined on drums by regular live collaborator Lydia Glanville.”

Listen to a sample of their record with KK NULL, a project born out of their collaborative performance with the Japanese noise artists and Zeni Geva frontman at Supersonic 2012.

Tickets for OM + ORE at Rainbow Warehouse are available via www.theticketsellers.co.uk