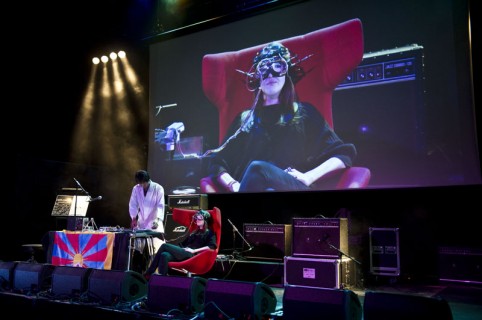 Masaki Batoh at Bring To Light

In case you missed it, The Quietus published this great review of our mini Supersonic Festival, Bring To Light.

“…another name should be added to Birmingham’s ‘Star Walk’ that genuinely lines its crippled pavements. And that name is Capsule. They are the small but dedicated team behind the mighty Supersonic Festival, an annual masterclass in extreme musical wonderment and as reliable in their curation as a fresh pack of Jaffa Cakes. However this year is a little different. In the usual Supersonic slot, a much smaller event called Bring To Light is scheduled, mostly set in Birmingham’s shiny new Library but with less bands, and less ‘bigger’ bands at that. However, such is my trust in Capsule, only a lunatic on the scale of Pinky (of Pinky And The Brain fame) would skip this…

Capsule’s uncompromising events have frequently saved me (and most likely many others) from severe internal tumult. Bring To Light is no exception – a bombardment of the revolting and the sublime which has furthered my pride in their work.”