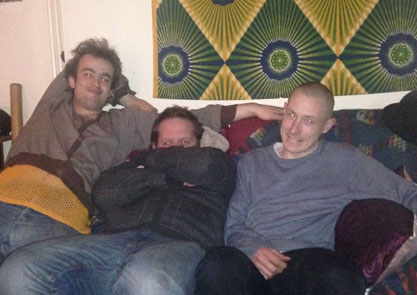 THRILLING HEADGEAR will support the mighty MELT BANANA this May 27th at the Rainbow Warehouse in Digbeth. We caught up with guitarist and local Brum resident Neil Bailey (Opium Lord, Stinky Wizzleteat) to talk about his new band and what the audience can expect from their upcoming performance. Tickets for the show can be purchased HERE.

First up, what’s with the name? We dig it, but we’re curious.
Thrilling Headgear is another Ren and Stimpy-ism. Wizzleteat was a big dumb name because we never wanted to take it too seriously, but we ended up getting all super cereal, so I reckon this is still not super cereal but it’s the attitude you bring that really decides it. So it’s not so big and dumb but still a bit dumb and big.

Neil, you already play in Opium Lord and before that Stinky Wizzleteat. What made you decide to form Thrilling Headgear and what makes this band different? Did you both have a specific sound in mind when you initially started?
After Wizzleteat finished up I text Nathan and Bruce to let them know, they’d put our EP out and I wanted to let them know they might be left with a load of unshiftable units since we wouldn’t be out there promoting them… so Nathan asks if I want to play bass in Opium Lord, and I was really grateful to be asked, playing bass was a nice change of pace and writing with 4 other people instead of just one was a fantastic experience. Really I love playing guitar and writing like I did in Teat but by the end of it I was bitter and angry, all lines of communication between me and John were down, we’d tried living together and it really didn’t work out. But John is one of my best friends, he’s a fantastic drummer and we just needed a bit of time apart to learn to be friends again. Thrilling Headgear is me getting to play with John Dixon again, getting Bruce and Nath involved, libidinous acts of creation, getting hyped off of hype stoked off of stoke. Trying to make noises we like.
Who are some of your musical (or otherwise) influences?
Musically, I think you have to continuously feed yourself good stuff and allow your intuitions to talk. Stuff that’s in there is stuff like Bad Brains, Melvins, Cavity, Floor, ZZ top, Oxes, Black Cobra, Godflesh, Deftones, Funkadelic, you can list bands for days but the page we’re all on is groove. Most of what I buy now is jazz and I listen to radio 3 a lot. Bruce has a hard-on for Electric Electric and other dance-mathy combos, John does a lot of reggae, but we all converge. What I would say is that I think it’s important to read and consume other narrative forms, identify approaches to structure in other media, or just think about stories and how they’re told, because music to me is story-telling. Influence is nothing without critical function. You have to think about why you like what you like.

How do you go about writing a song? Do you jam and figure stuff out that way or is the writing process much more structured?

Writing songs is a bastard, but I love writing songs. Writing a song is like having a baby. Writing songs is like creating a landscape for yourself to explore, but in the end you have to draw just one line from one side of that landscape to the other. Sometimes that landscape is a little plain and unadorned so you have to plant something, sometimes you have to chop back. Sometimes what you thought was a main bit will turn out to be a tiny link, sometimes a tiny link will become a main function. That’s where jamming is good, because John’s drumming is very descriptive and it can carry it’s own. What’s important is to play every day, even if you’re feeling fallow. I write slowly but I’m not in any rush. I want quality. I like things to come together intuitively. Frustration doesn’t do you any good. The attitude you bring to playing is important. Playing music is fun! Functionality is a primary concern. How things function, how things function against each other, in relation to ever other aspect of a song. A song is a mechanism, you just keep tweaking at it till you achieve as economical a transference of meaning as you can get. Something’s done when you can say, “of course it goes like that”. Like there’s no other way it could have been.

What can people expect from Thrilling Headgear live?
John Dixon playing rad. Groovemaster Goodenough rocking out. Haircut 100 thanking everyone and their mum. First steps on the short road to global domination.
You’re supporting Melt Banana, are you psyched?
Yeah we’re stoked. I don’t know how it happened but we’re really, really grateful for the opportunity. Thanks everyone at Capsule you are the best. We got some impetus now to actually be awesome, so we’re going to go and work on being awesome.
For tickets to see MELT BANANA plus GLATZE and THRILLING HEADGEAR go HERE.
SHARE: