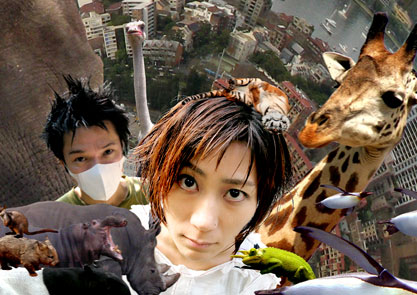 MELT BANANA return to Birmingham’s Rainbow Warehouse on May 27th. Don’t forget to pick up your advance price tickets from here, tickets will be more on the door.

Now those of you unfamiliar with Melt Banana might want to peruse the highly entertaining FAQ section of the band’s website here. We picked out a few Qs for the newly initiated:

Q. Who is MELT BANANA?

“Answer: Main factors of MELT-BANANA are YAKO, who is a singer of the band and write all lyrics and write some of the songs, and AGATA who plays the guitar and write most of the backtracks of the songs.”

Q. What type of music?

Q. Is Yako singing in Japanese?

“Answer: I am singing in English, and you can find all of the lyrics inside of CD booklets if you are interested. When I first started singing in a band, I was singing in Japanese, but I changed to English. I thought that English would fit more to my style of singing.”

Q: What is your motto/philosophy?

“Answer: For today, jump before you look.”