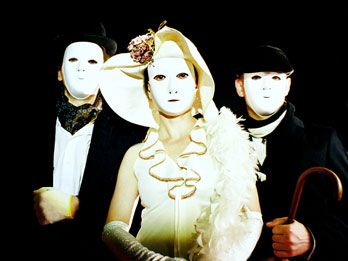 Pram
‘Uncomfortable harmony’
Offspring of the legendary Too Pure label, proudly rescued by Domino and praised by the most sophisticated critics from the very beginning, Pram is a strange delicacy that has survived the passing of time despite and thanks to its tremendous peculiarity. It is an absolutely original sonic universe that is unclassifiable – somewhere between science fiction and fairy tales. On stage, they give their bizarre sound a new dimension, and accompany their live show with audiovisuals that are as special and unique as their music.

ZX Spectrum Orchestra
‘Bringing back the 8-bit aesthetic’
Clive One (or Brian Duffy) and Clive Two (that is, Mike Johnston) take their passion for retro hardware and the 8-bit aesthetic to the limit, by rescuing (twenty-five years after its birth) Sinclair’s legendary ZX Spectrum, the personal computer that was a milestone in the eighties and introduced thousands of teenagers to the world of programming. Old school beats with a sense of humour and a nod to the great electro classics. And of course, absolutely everything is done with Spectrums 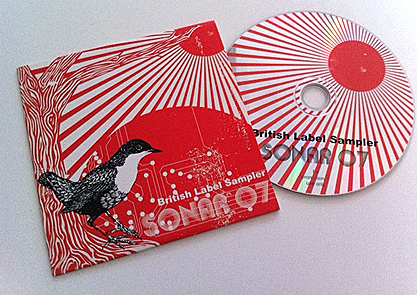 The Invisible on Accidental Records
A London based band fronted by the singer and guitarist Dave Okumu. The band formed as Okumu’s solo project but quickly developed into a full fledged band with friends Tom Herbert (bass & synthesizer) and Leo Taylor (drums). Their self-titled debut album, released on 9 March 2009, was nominated for the Mercury Prize and selected as critics choice for iTunes album of the year.
www.theinvisible3.tumblr.com

Mica and the Cluster on Accidental Records
A sextet of producers and MCs who take grime into new territories with a daring mixture of often dissonant sounds, unexpected breaks and most unusual arrangements. The meeting point for experimentation and the new British urban music.
www.myspace.com/micayomusic

Cursor Miner on Lo Recordings
Combining pure dancefloor anthems, dirty twisted breaks, off the wall experimentation and pop sensibilities, all with a good dose of social commentary, Cursor Miner aka Robert Tubb has been likened as what would happen if Beck and Bowie combined with Kraftwerk and Autechre in the middle of an early nineties illegal rave.
www.myspace.com/cursorminer

Black Devil Disco Club on Lo Recordings
An electronic disco music project by Bernard Fevre, a French musician who also released synthesizer compositions on library music albums under his own name and under the alias Milpatte.
www.facebook.com/pages/Black-Devil-Disco-Club

Andy Stott on Modern Love
A Manchester-based producer of dub and techno music that has released three albums with the Modern Love label. His debut album was Merciless in 2006, and was followed by Unknown Exception (2008) and Luxury Problems in 2012.He has undertaken several productions under the moniker Andrea and these works were released on Daphne, a sub label of Modern Love.
www.facebook.com/pages/Andy-Stott

Claro Intelecto on Modern Love
A heavyweight, dub oriented house and techno framework has loosely characterised Claro Intelecto’s output on labels like Modern Love, as well as his live performances over the years. Key releases include his “Peace of Mind EP”, “Metanarrative” album, a series of “Warehouse Sessions” 12″s and a career defining remix (having been originally requested by the band’s Martin Gore) of Depeche Mode’s 1982 classic “Leave in Silence”
www.claro-intelecto.com

Pendle Coven on Modern Love
Manchester-based duo of Gary Howell and Miles Whittaker (aka MLZ). Their productions are very much in the dub-techno tradition as established by Basic Channel and Chain Reaction, but imbued with an ineffable Rainy City melancholy and other influences like dubstep, ambient, deep house, ‘ardkore and even drone metal.
www.pendle-coven.co.uk

Jazzfinger on No Fi
“If ever a band’s ‘sound’ was simultaneously hauntingly pastoral yet at the same time grindingly industrial then it would be Jazzfinger.”
www.myspace.com/jzzfngr 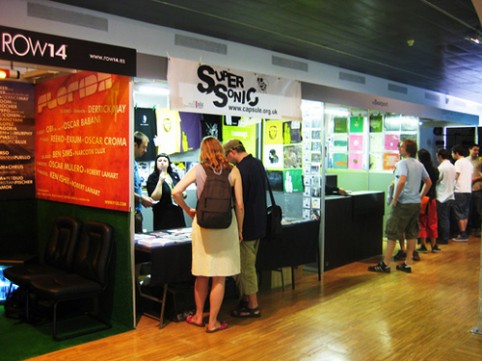 Capsule continued the coordination of West Midlands based creative companies at Sonar and in addition were selected by UKTI (UK Trade & Investment) to produce a compilation CD and organise a reception event for the UK Music presence at Sonar 2005.

In 2004 Capsule were commissioned by UKI Trade Partners to co-ordinate a selection of West Midlands based creative companies to Sonar. Capsule ensured the presence of these companies within the festival, increasing their opportunity to promote to an international audience and network with key members of the music industry.

This project initiated the BPI ‘s first appearance at Sonar festival this year, providing an official presence for the UK music industry. Capsule worked closely with the BPI and this resulted in 3 recordings from Birmingham based labels being included on a further compilation CD. This CD featured UK labels performing or attending that year’s festival, including acts from Warp and Domino.