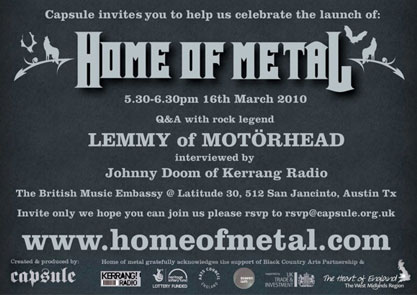 The Home of Metal Digital Archive has developed into a unique resource and forum for music fans globally. Capsule officially launched the archive in 2010 with an exciting event at SXSW, establishing it as an international resource.

Part of the launch saw Johnny Doom from Kerrang Radio! conduct a Q & A with Lemmy from legendary rock band Motorhead, discussing his early musical influences, growing up in the heart of England and the culture of Heavy Metal.

Explore the archive via www.homeofmetal.com 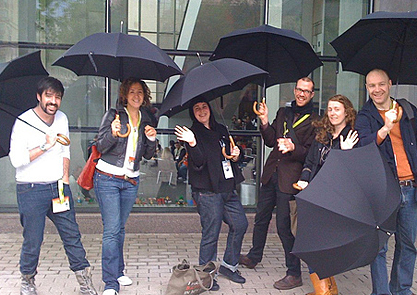 A delegation of the country’s leading digital artists and producers are headed over to Austin, Texas in 2009 to attend the SXSW Interactive festival, funded by Arts Council England. The festival celebrates the creativity and passion behind the coolest new media technologies. In addition to panel sessions that cover everything from web design to bootstrapping to social networks, attendees can make new business connections at the three-day Trade Show & Exhibition.
The delegation, known as The Umbrella Group, researched new opportunities and experienced emerging digital trends first hand.

Whilst out at the festival The Umbrella Group, ran The Hat Game designed by Simon Games. Featuring a GPS tracked bowler hat, festival attendees could contact  The Umbrella Group, track the hat online and claim the hat, wearing it for as long as they can until it is claimed by someone else. 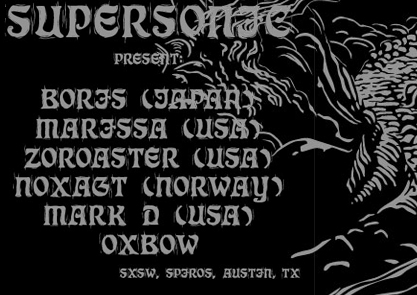 The event achieved notoriety for a riot that ensued after the venue’s security staff attempted to stop the show. The club’s bouncers wanted to close down the event when Oxbow frontman Eugene Robinson began his infamous stripshow.. 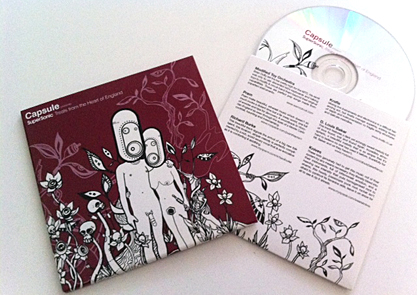 Capsule coordinated a compilation CD of West Midlands acts to take to SXSW in Austin, Texas in 2006, this was commissioned by UK Trade & Investment to showcase West Midlands talent.

10 tracks were selected by  Static Caravan, LittleBig and ATP.

Modified Toy Orchestra
Brian Duffy set the bar pretty high for the MTO, his remit was only to use discarded kid’s keyboards and talking toys to modify & circuit bend them beyond their original capabilities. These are perfect pop songs made from imperfect instruments.
www.warmcircuit.com

Pram
Pram make beautiful, ethereal music which doesn’t so much evoke a distant time but a far away world, one full of wonder and ripe for discovery. A soundtrack to Victorian England as seen through the eyes of a Monte Carlo cocktail, haunting and mesmerising.
www.myspace.com/pushthepram

Richard Burke
This beautiful track signals the arrival of a big new folk talent, this lovelorn, simple melody is perfectly complimented by a rich, world weary vocal that is as evocative as it is comforting & soothing.
www.myspace.com/richardburke

D. Louis Baker
This track features a dark yet achingly sweet melody full of love, found, lost and found again. Incredibly atmospheric, a beautiful melody that is so simple that it’s hard to believe no one has used it before, thankfully for Mr. baker and us they haven’t.
www.myspace.com/dlouisbakerfriends

Knives
These kids genuinely had to get this music out of their system by any means necessary, they literally bleed into their instruments, full of bittersweet emotion, and a heaving raw intensity that puts homogenised rock to shame, this heady, passionate punk rock racket isn’t afraid to confront its feminine side, leave it on show for all to see & rip it shreds.
www.myspace.com/weareknives

The Arm
In a world of conventional bands with conventional song structures its refreshing to find The Arm, discordant rhythmic time changes, throbbing bass and wild keyboards, with an intensity all their own they cut a unique voice in the world of instrumental post rock.
www.the-arm.co.uk

Haddonfield Illinois
Have you ever wondered what a band comprised of the bastard offspring of John Carpenter and born into the heavy metal Mecca that is Birmingham would sound like? The answer would be this, clearly influenced by 70’s Italian zombie films they take the 3 chord punk ethos of yesteryear and apply it to synthesizers, electro beats and layers of noise to create a strain of mutant electronic doom.
www.myspace.com/haddonfieldillinois

Sika Redem
The West Midlands has always had a knack of being on the cutting edge of metal whether its with the forefathers of the genre, Black Sabbath, the early thrash of Napalm Death or it’s newest hopes Sika Redem, who somehow manage to have more creativity in one ten minute track than most bands cover in a complete LP. Complex intricate rhythms combine with crushingly heavy riffs all containing a melodic edge that metal so often forgets about.
www.sikaredem.com

Copter
How do you sell rock n roll back to America? The answer quite obviously is Copter. It’s all about primeval garage rock with dirty blues riffs and a singer that doesn’t just talk the talk, but walks the walk and then some. This is the kind of track that would kick start that early morning house party come riot that memories are made of.
www.coptercentral.com