The key objectives of the We Are Eastside initiative were to

– Build and develop awareness amongst new and existing regional audiences of We Are Eastside.
– Profile the sixteen organisations involved individually and as an ‘arts hub’ and destination to a national audience
– To improve communication amongst the organisations based in Eastside for future collaboration and advocacy

In addition, local historian Ben Waddington was commissioned to deliver Eaststride, a walking tour of the area, introducing visitors to both the contemporary organisations based within Eastside as well as the historical context of the area. A hosted press visit took place and as a result some key cultural journalists were introduced to the work of Eastside organisations. A BBC Culture Show was secured for the following year, reporting on Eastside as Birmingham’s cultural hub.

In 2012 We Are Eastside presented Birmingham –  The Magic City as part of ‘City States’ at the 7th Liverpool Biennial – welcome to the hidden undergrounds, blushing civic pride and future visions of our ‘magic’ city. 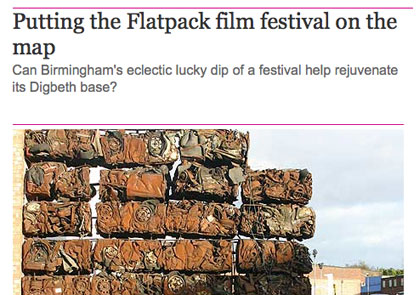 A similar scent of frustrated optimism pervaded Birmingham during the excellent Flatpack film festival. Flatpack is a six-day event that aims to spill out across Digbeth, the abandoned factory and warehouse district now being occupied by the so-called culture industry. The city of 1,001 trades wants to reinvent itself as the city of 1,001 media firms, fashion labels and organic coffee shops. A loose collective of arts groups called We Are Eastside is trying to turn Digbeth into Birmingham’s “cultural playground”, the same method that has been employed across England’s old manufacturing bases. With new high-speed rail lines reducing the journey time from Euston to 46 minutes, the city even has one eye on persuading bored London hipsters to take a weekend trip to Brum
Guardian

We were then taken on a ramble through the creative hub of Eastside Birmingham. In the industrial buildings which line the river there are springing up artist spaces and studios, between artist run space Eastside Projects, The Flatpack Festival and Vivid, another industrial Art space there is much to be anticipated of this community. The most notable thing perhaps being the comparatively plush and affordable studio space providing a great springboard for the artists and creative businesses inhabiting them.
Dazed Digital

We Are Eastside’ present themselves immaculately to those outside of their own streets in a way that is highly accessible and welcoming. The identity for We Are Eastside has been superbly designed by James Langdon and features a beautifully crafted typeface by Radim Pesko. There is consistently an air of innovation, humility and a creative pride in Birmingham that is not elitist but rather aims to encourage the arts wholeheartedly.
Jotta