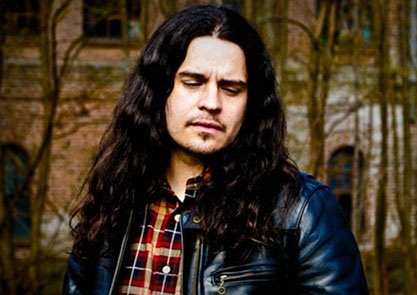 Stephen O’Malley is a musician and artist from Seattle, who has conceptualised numerous drone, doom and experimental music groups, most notably, Sunn0))), KTL, Gravetemple and Aethenor.

A long lasting friend of Capsule, Stephen has performed and exhibited under various guises at Supersonic Festival.

We are very pleased to present his recent collaboration; Nazoranai, another heavyweight collaboration under O’Malley’s sleeve, with Oren Amabarchi and Keiji Haino at CBSO Centre next Tuesday 9th July. Talking about the project,  Stephen says,

“…It was one of those ‘what now’ moments you never imagine happening, having been a fan/follower of Haino’s playing, concerts and recordings over the years. Five years later, somehow, we ended up as this trio. Haino, Oren and I were all in Holland for one reason or another and decided to try it. I played bass for the first time on stage with this group. Maybe it shows but the idea was a power trio backing up Haino-san, with a lot of amplification…It’s hard to describe the lessons through real-time communication in music with such a master of form, but needless to say, they were much different than what I was expecting and beyond! Proof again that expectations lead to dead ends. Was a most challenging experience in real-time music. I feel incredibly honored to be part of this trio.”

Tickets for this event are available via theticketsellers.co.uk

Support comes from Nicholas Bullen, who will be presenting his new album ‘Component Fixations’.